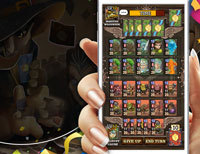 Magic Nations will debut on smartphones in August

The Prime Bit Games S.A. team is slowly finishing work on porting 'Magic Nations' on mobile platforms, this week will be launched with beta tests for first users. 'Magic Nations' is designed in such a way that the player can use the game on each platform without losing the progress saved on another...

Contract with the Acram

On February 25, 2019, Prime Bit Games S.A. signed a contract with the Acram studio for game porting. As part of the cooperation, the producer will take care of the porting of two already released games and another one, not yet announced. After the implementation of these projects, the partners...

Participation in the charity gala organized by Pod Skrzydłem Anioła.

On February 23 in Rzeszów, a charity gala organized by the association under the Angel Wing took place. Gala was to save the foot of little Olek. Prime Bit Games S.A. he was one of the sponsors of the campaign. Thanks to the generosity of sponsors and bidders, PLN 60,000 was collected. zł.