PrimeBit Studio was recognized as one of 12 best businesses in Poland, a finalist in prestigious contest „ImPuls do biznesu”(impulse to business) organized by Puls Biznesu. It is a very important step on PrimeBit career path.

On 23 May 2016 in Warsaw, Tomasz Gułak (Business Manager) and Michał Ręczkowicz (General Director) proudly represented PrimeBit during presentation of mobile game called “Freddy”, the flagship product of the company. That presentation was a prelude to finals. Michał made great impression on commissioners. the commission’s members were entrepreneurs, lawyers and investors – Tomasz narrates. – He gave his best, his speech was concrete but passionate and honest. Finalist status in such prestigious competition is already a great honour – Michał admits. – However the more you have, the more you want, that’s why we are aiming for first prize. 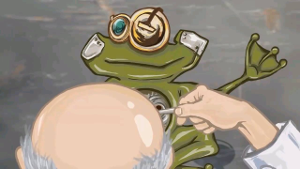 Freddy (Adventure) is innovative arcade game on mobile with stunning graphics. The main character is a semi-mechanical frog. The player is supposed to help her to escape from the lab and experience many interesting adventures. Project was created in 2012 under the brand MobiTouch – the first company of Michał Ręczkowicz, President of PrimeBit Studio. He didn’t want to part with his beloved “baby” and one year after establishing new company (2015) Ręczkowicz repurchased the game. Right now Freddy is recognized as PrimeBit Games product…

Freddy does well on competitions. In 2014 the game won first place in international Unity3D&amp;Microsoft contest. In 2014 it took second place in Microsoft contest called „Twoja firma, twoja szansa na sukces”(Your company - Your chance for success). In the same year Freddy was nominated in the plebiscite held by Mobile TrendsAwards in the category „best mobile game of 2013”.

Results of “ImPuls do biznesu” contest will be announced during official ceremony that will take place on 2 June 2016, also in the capital. We keep our fingers crossed!