On March 23, the largest Investment Congress in Europe, Invest Cuffs, took place in Krakow, our President Michał Ręczkowicz was one of the main experts in the debate. He spoke, among others on the rapid development of the blockchain market in games and Freddy's success in Asia.

The game produced the team of Prime Bit Games S.A. - Caveman Chuck received the rating score 8.0 in the opinion of Internet users, congratulations to the whole team.

On 17 April 2019, our company Prime Bit Games S.A. signed a very important cooperation agreement with Fintech S.A. for the amount of PLN 3 million. 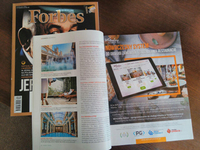 A Wirtualny Kelner at Forbes Travel

On March 28, 2019, was a full of the success of the application created by the Prime Bit Studio team.