A room full of programmers and computers, "nerd's" atmosphere, full of passion and persistence, and at the same time great fun – that is how few words can describe what was happening during this year Rzeszów’s Hackathon, which took place on 18-19 of March in IQ Academic Club of ITMU. 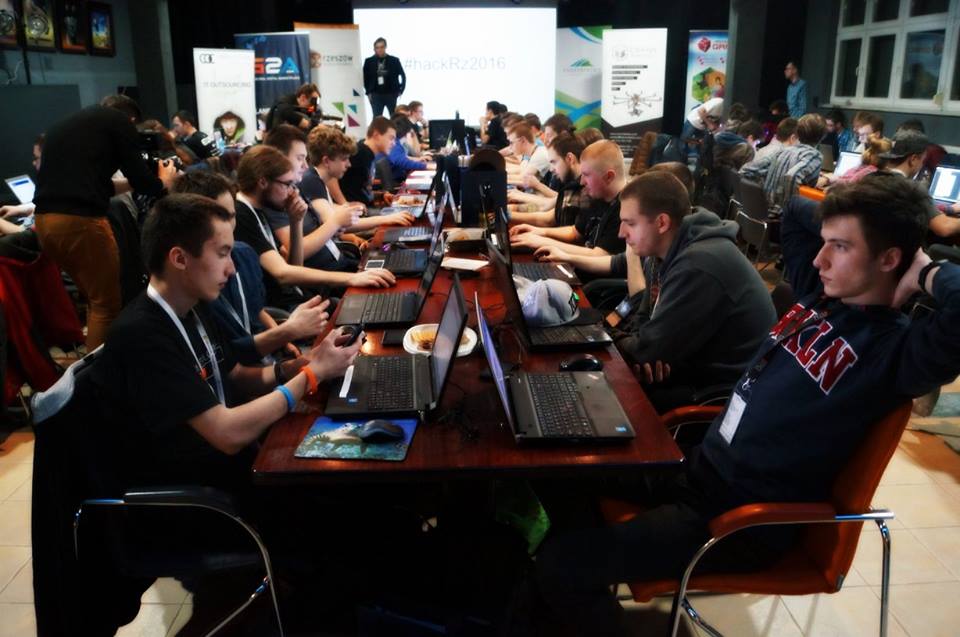 Rzeszow Hackathon is a programming contest, which is a characteristic feature is team programming in one place for 24 hours without a break. The aim of the competition is to create a prototype projects, which could become a starup. Hackathon Rzeszów is the largest programming event in Eastern Poland under the patronage of Marshal of the Podkarpackie, Mayor of the City of Rzeszow and Microsoft Poland Company.

This year, the computer marathon was attended by about 130 people, including students of different universities, school students and employees of IT companies. For only such an event in Poland, the developers came from: Lizhensk, Debica, Przemysl, Krakow, Silesia, Gdansk, Warsaw, Szczecin, and even from abroad (Ukraine). The rank of events raised the presence of technical consultants from reputable companies: Microsoft Poland (Tomasz Kopacz) Meetface (Robert Szymanski) PrimeBit Studio (Michael Ręczkowicz) Cervi Robotics (Vadym Melnyk). It is worth mentioning that Tomasz Kopacz is known throughout Europe as a specialist of Azure Cloud. The Hackathon Rzeszów involved also brands such as: G2A, KLASTERit, PGS Software, Order Of Code, Servocode, Ksi.pl, SCIRR, JetBrains, Helion SA, Unity and Kula Bowlings Club.

It is important to get prepared

The event began as planned at 18.00 on Friday 18 March. First there was a short speech by Michael Ręczkowicz, CEO of PrimeBit Studio and Vadym Melnyk, CEO of Cervi Robotics - representatives of IT companies, organizing the whole event. They greeted the participants, and explained the rules of the competition: - Hackathon’s rules are very clear - says Michael Ręczkowicz - the most important of them is that the project has to be based on the Microsoft Azure Cloud, just as Microsoft is the main partner of the initiative. – He adds.

An important condition was also a maximum number of four people in the team: - Unfortunately, not all remember this. - Tells Vadym Melnyk - One team, even though they had really interesting and innovative project, was not taken into account in the finals because of that.

The competition was attended by about 40 teams. Each of them chose one of the three categories of project area: The Internet of Things, business applications and games.

- Participants were well prepared. - Says Vadym Melnyk – Certainly, very helpful was training with Microsoft specialist, Thomas Kopacz and conducted by the Warsaw Pragmatists Company programming training, which we organized in the framework of the event before the Hackathon.

Better with the music

It was worth it to participate in even for the sake of the climate itself, which was definitely unique. To make the non-stop work livable, the organizers prepared for the participants many attractions, including contests with prizes, musical performance on the piano, as well as endless snacks. Traditionally, there were plenty of pizza and energy drinks, but also - for the first time in the history of the marathon - appeared healthy, revitalizing fruit and vegetable cocktails, prepared on the spot by "Get to know the taste of health." Tasty and fully nutritional smoothies sold out on Saturday morning like hot cakes.

- The atmosphere was really great. - Says Michael Ręczkowicz - It turned out that it is better to programme while the music plays. In addition to the piano we heard a guitar – he reports on - some in the audience brought their own instruments and play on them during the short breaks.

Winning is just the beginning

After a night of programming, 10 teams qualified to the stage when their projects could be presented to the forum. During the final, which took place on the second day, among the 10 teams jury (consisting of representatives from partner companies, organizers and investors) selected the 3 winning teams - one from each category: 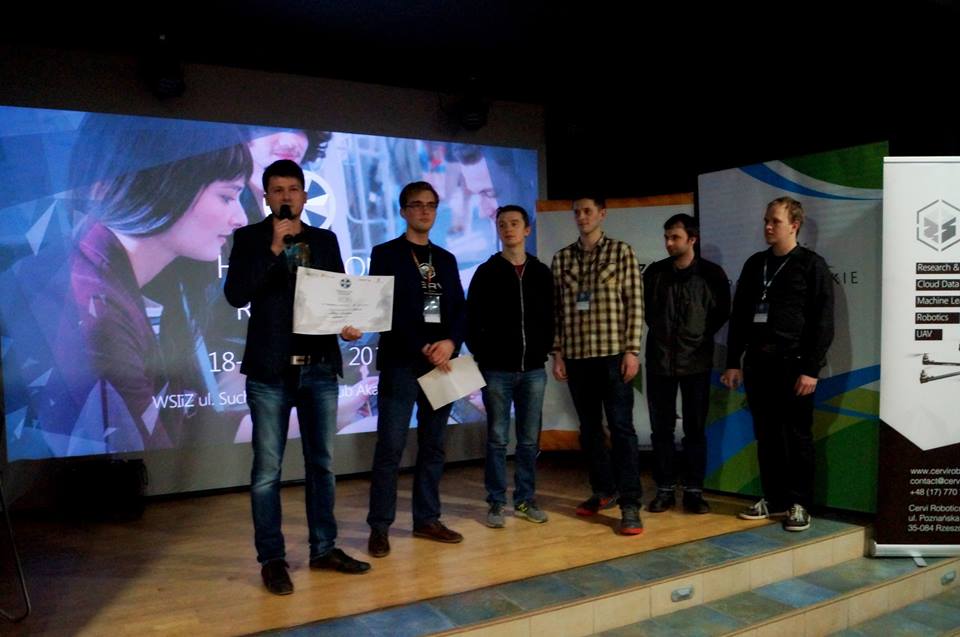 „Go back Home” is asymmetrical multiplayer game, which takes place in space. The project uses virtual reality (VR) and the Oculus Rift controller.

„Snap Wallet” is an application that facilitates the control over spending by archiving and smart management of receipts.

„Home Controller” is a smart-air conditioning, based on the CO2 sensor and on many other devices, occurring in the place and linked by Bluetooth LE.

The winners received vouchers in the amount of 2000 PLN and numerous gadgets. The award in the loT category was given by the Mayor of the City of Rzeszow. In addition - the team that won in this category (Home Controller), entirely made up of students from ITMU, was awarded by the Rector of ITMU with the 30% fees remission for the whole semester.

In addition to these three teams jury also awarded other teams that were marked by ingenuity and quality of completed projects. Among them they were handed out the following awards: iPads, licenses for Unity Pro game-developers, Bizsparks (free Microsoft software for business plus Azure Cloud) and numerous gadgets.

- The standard of competition was very high. - Admits Michael Ręczkowicz – The participants’ ideas were innovative and unique. Investors are already interested in these projects and have announced that they will contact the originators. – He adds.

Patron of the event were: Marshal of the Podkarpackie, Mayor of the City of Rzeszow and Microsoft Poland.

Find us on Facebook.com: